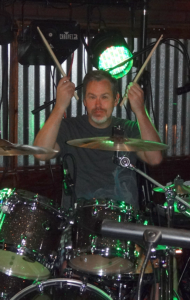 Brian Mohrman has been playing drums and percussion for 20 years. He started his music career in Austin playing for a club jazz singer. Shortly after he moved to Virginia and began working in the studio with fellow local musicians.

Brian is also a Master Herbalist and lives in Matthews with wife Tina and their two sons. He also sites Carter Beauford as a major influence and inspiration.