This trio, with members hailing from Hickory and Charlotte, opened for the Logic band during a NYE party, held at the Lazy Hogz Saloon. The Big Fam Damily plays a variety of songs and kind of brings them together in a primordial creative soup of mash-ups. The fun-filled night was an instant smash for everyone involved- including the at-capacity crowd in attendance. If you haven’t checked them out, you should. 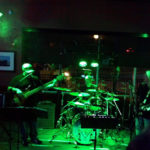 Forrest assisted the Logic in 2013 for a whole slew of shows while our guitarist, Strut, was on the mend, and remains a close, well-respected friend of the band to this day. Forrest is an incredibly accomplished bassist, and resides in Gastonia. His ability to morph into any genre at any given moment makes him a favorite stand-in for any band or artist looking for top-notch talent. His first show was the 2012-2013 New Year’s Eve gig at the Hickory Tavern in Hickory. 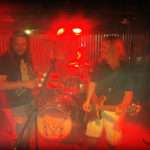 A 2013 show at the Lazy Dog: Eric was invited to join the Logic onstage for a rendition of Led Zeppelin’s “Kashmir” in August 2012. Lead singer / Producer Chad Austin, loves Eric’s vocals so much, that he brought Eric into the studio, under his own LadyDancin Records label. The results of which can be heard here.

Kurt Benfield joined the Logic on August 8, 2013, at the Lazy Dog for a fun-filled, 4-song, mini set. A video showcasing the moment can be viewed here. Kurt also plays bass and sing’s back-up in the talented “Mama’s Remedy Band”, fronted by Kurt’s Wife, Jill Benfield.

Logic members Chad and Strut have a close and long-term friendship with Kurt. They played together from 1988 – 1992 in the hard rock outfit TZN (Teasin).

Jill Benfield joined the Logic on December 31st, 2017, at the Main Cellar to ring in the new year with a smokin rendition of Stevie Nick’s “Stand Back.” The studio version of this rendition can be heard here.

Jill is the lead singer of the brilliant “Mama’s Remedy Band.”

Sat in at various shows in Lenoir, from 2008-2011. Jeff is the lead singer for the band FracXured, and is always welcome on the Logic stage.