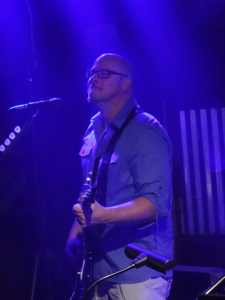 Eric joined the Logic in May, 2004, and has since played hundreds of shows with the band. His musical skills, comedic timing, and symbiotic relationship with the other members of the band help make an important part of the Logic recipe.

He was diagnosed with Stage 3 colon cancer in 2012, but has successfully beat the demon: He was cleared with a full bill of health in 2014.

Now we’re stuck with him.