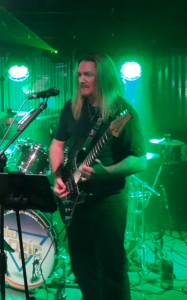 Chad Austin started playing guitar and piano around age 11, and writing music a few years later. Inspired from his Dad (the Martians – “Lawdy Miss Clawdy”), Chad also played saxophone throughout middle school and high school, but he continued to play guitar. Somewhere during those early years he picked up a Roland synthesizer keyboard, the first keyboard of many. It was during this time period Chad became obsessed with sonic textures, an obsession that still haunts him to this day.

When he turned 18, he received a 4-track recorder as his high school graduation present- signifying the start of life as a Producer and Engineer. And at the same time, Chad was hired by regional NC band Kidstuff as a lead guitarist.

The Kidstuff gig took Chad from playing small high school parties to large club gigs. He was able to open shows for such rock dignitaries as Kix, Nazareth and Blackfoot.

Chad left TZN’ in 1992 to go back to school to study computer programming, but the musical drive was too much to ignore. He started a playing and song-writing frenzy. Still studying programming, Chad sent out tapes of newly created original material to labels and magazines. A feature was seen in Guitar World magazine (Oct. 92), alongside Eric Clapton. Although there was attention and discussion in New York within Atlantic Records to pick Chad up on their artist roster, it never materialized. Out of frustration and impatience, the first Chad Austin solo album, “Carpe Noctem”, was released on his own label, I-C-U Records, in December 1992.

In August 1993, Chad joined up with singer James McElroy, and several other musicians- including guitarist Eric Ellsworth (Run with Fear). Chad and James had known each other for some years prior and had always written well together. With a style similar to Counting Crows meets Pearl Jam, the newly formed band called themselves “9 Days Wonder” and quickly wrote an album’s worth of material and started performing. At Chad’s urging, the original bassist and drummer were replaced with prior TZN’ rockers Jim Bolt and Billy Jones. In the bitter cold of January 1994 the group recorded the album “Under Deep Water”- which featured another TZN Alumni, Kurt Benfield, on backing vocals. The album was released in March, 1994, to rave reviews. Chad and James gained attention as a creative songwriting force, while Chad also received notoriety with awards as a producer and engineer. The band’s live shows were explosive and entertaining to the large crowds that followed them.

There was a high level of creativity within the group, but there were ego conflicts to match. The internal conflict began building while promoting the album. This turmoil caused Billy and Jim to leave in mid- summer 1994, but Chad, James and Eric still continued to write and perform scaled-down shows under the 9DW name. In late summer 1995, they released the cerebral and dark “Autumns Forgotten”, but the pandemonium within had taken its toll on the remaining members. By December 1995, 9 Days Wonder came to an end.

In January 1995, Chad released another solo album entitled “Mad Mad World.” While 1996 found Chad still writing and jamming in several different outfits, the successful creativity of 9 Days Wonder still haunted him. Chad and James reconvened in 1997 and released another album under the name 9DW2, and called it “Hymns and Wonders.” At the same time, Chad had been writing material for another solo album. “This Island I” was released in January 1998 under Secret World Records and was a popular album for him, garnering regular FM airplay with the song “All I Deny”.

In August 1998, Chad invited drummer Jon Zimmerman for a jam sessions. These jam sessions were to turn into regular meetings, and brought into being the band the Logic.

Chad still continued to write music, releasing “Afterthought” in 1999, a follow-up solo album of “This Island I”.

James and Chad still continue to write together, with James co-producing a few tracks on the “The Id and the Ego”, the 2010 Logic release.